The Hearty Boys just keep on surprising us, don't they? Earlier this year, the original winners of "The Search for the Next Food Network Star" started serving brunch in their catering/HBTV studio space in Lakeview. Now they're taking things up a notch by opening their new restaurant, Hearty, in the same space, at 3819 N. Broadway. The menu promises to showcase upscale comfort food where they'll reintroduce dishes they grew up with, but adding a modern twist.

SomethingGlorious spoke Hearty Boy Steve McDonagh, who said he initially had reservations about opening another restaurant, but after seeing the popularity of their Sunday brunch and realized the the dearth of restaurants on that stretch of Broadway, they decided to give it a go. And go they will: their new website, featuring the new menu. just went live.

McDonagh, along with his life-and-business partner (and chef) Dan Smith , will close the space Oct. 21 and reopen for business following a bit of redecorating on Nov. 4.

With Chicago Gourmet coming up this weekend, local foodies are all a-twitter about the impending gastronomic event. Last year, the site flowed with plenty of wine from around the world, but the food was surprisingly scarce. The focus was misdirected and lots of attendees ended up getting pretty hammered without any food to soak up the wine.


Some things are worth the wait and that officially includes the very-long-awaited sophomore album from Annie, who took the indie pop world by storm in 2005 with her debut, Anniemal.

The new album, Don't Stop, picks up where the first left off, but shows the Norwegian singer/DJ's musical growth. Annie has been working on the album for three years, picking up new sounds and influences along the way. She again works with collaborators Timo Kaukolampi and Richard X but also taps producer Paul Epworth (Bloc Party, Primal Scream) and Franz Ferdinand frontman Alex Kapranos. SomethingGlorious got the advance and can't stop listening.


Whenever the team behind avec and Blackbird kick off a new project, the rumors swirl. Last fall, news broke that the guysâDonnie Madia, Paul Kahan and Eduard Seitan, along with Terry Alexander and Peter Garfield of the Violet Hourâtook over the legendary and much-loved Pontiac space in Bucktown. Construction and renovations soon followed and while many hoped the sprawling front patio would emerge for summer, the rehab work is still going on, but is progressing at a steady clip. And the wait is almost over.

Recently, Time Out Chicago revealed that the still-unnamed spot will focus on tacos. SomethingGlorious just discovered that this new space, which is on target to open in late October barring any issues, will primarily be a bar with a walk-up taqueria (no exterior door, just a window) and will feature about 10 items on the menu, according to Executive Chef Paul Kahan. Kahan, who embarks on a SoCal "research and development" trip this week, said that he was inspired when he "ate something and loved it." The food will focus on al pastor tacos, much in the vein of Santa Barbara, Calif.-based Super Rica Taqueria, of which Kahan is a big fan and says has the best tacos he's ever eaten. While Kahan will pull inspiration from his time working alongside Rick Bayless at Frontera Grill, he wants to experiment with "fun food that tastes good," like eventually having fried chicken and moleâwhich is something I can definitely get down with.

The overall concept will take people back to Bakersfield, Calif., in the 1950s where people like Merle Haggard and Buck Ownes birthed honky tonk music, where migrant Mexican workers inspired food and where you could get a good, cold beer for $1. The space will have a square center bar and a number of booths, and while the bar will serve vodka, gin and run (only one of each, and I'm happy to report the vodka of choice is Tito's from Austin, Texas), the spirits program, curated by Violet Hour manager Michael Ruble, will focus primarily on tequila, beer and hard-to-find, lesser-known American whiskey (bourbon, rye, etc). Beers will be cheap and will come in both seven- and 12-ounce draft pours, so people can get a quick beer and taco or tostada (maybe even a shot of whiskey) for about $10.

Think the crowds at avec and Publican are crazy? Wait till this joint opens this fall. This will likely become the new hipster Mecca, but instead of it being only a summer spot, the interior allows for hanging throughout the winter. Rack 'em up, boys. 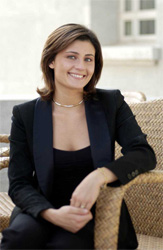 I recently had the pleasure of having lunch with Gaia Gaja, daughter and heir to the famed Gaja Wines estate founded in 1859 in Barbaresco, Italy. Gaja wines are first rate and are considered some of the best Barbaresco in the world, consistently rating above 90 points (usually more than 93) from Robert Parker and the Wine Spectator. After tasting a few of their newest releases with Gaia at NoMI restaurant at the Park Hyatt in Chicago, I understand why. Gaia was in the U.S. meeting with various people in the wine trade to help keep the Gaja name flowing. She was a wonderful hostessâengaging, entertaining, funny and incredibly knowledgeable about her family's history and wine.

This wasn't my introduction to Gaja, mind you. I've known about and have had some of their wines in the past. But getting to taste these during a one-on-one lunch with a member of the family was a real treat. Gaia, one of three children to Angelo Gaja (the current owner and innovator), is a fifth-generation wine producer of her family's treasured wines. During a lunch overlooking Chicago and Lake Michigan, Gaia and I tasted through the 2005 Barbaresco, 2004 Rennina and 2004 Sugarille, the last two both from the Gaja's estate in Montalcino, Pieve Santa Restituta. Angelo Gaja acquired this estate, named for the small church located in the heart of the estate, in 1994 to help grow the Gaja name throughout Italy. By adding these two Brunello di Montalcino wines (both 100 percent Sangiovese), they now have bragging rights to even more of the best wines coming from Italy.