After talking to a bunch of people on Friday and seeing other blog postings, it looks like Thursday was somewhat of a cluster fuck for many. But whatever mishaps took place on Day 2, Friday made up for it in spades. My day kicked off with a fantastic interview with Brandi Carlile at the Intercontinental. Brandi, whose new album comes out April 3, looks and sounds wonderful. She grew out her hair and reminds me of Mandy Moore, even with the cute little birthmark. We chatted for about 40 minutes about everything from recording with T Bone Burnett and the song content to her personal life and the need to have nature in her world. Afterward, I headed over to the Fader Fort, which for all intents and purposes was one of 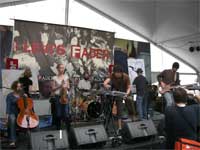 the best spots of the weekend (save the weak SoCo punch). I caught Cloud Cult, the sextet (or octet if you count the two artists painting on stage behind them) from Minneapolis, who sounded absolutely brilliant. It surprised me that there weren't more people there because it's bands like this that I feel really merit the exposure at these festivals. The inclusion of a cello and violin completely enhance their experimental northern sound and just make it all the more gorgeous.

Strolling down 6th Street, we stopped to grab a slice of pizza and, while waiting in line, heard someone ride by on a bike and scream "Perez Hilton!" I turned back around and the self-proclaimed gossip gangstar walked in front of us, accompanied by English buzz boy Mika. I swear,

Perez is a glutton for attention. He died his hair pink and, wearing a bright yellow and pink striped shirt and loud yellow pants and looking fatter than ever, he honestly looked like the Ronald McDonald float from the Macy's Day Parade. Poor thing.

Hit the Aussie showcase for a few minutes to try and see Wolf and Cub (we were early and unfortunately missed them) and saw a couple songs from veteran Oz rockers You Am I.

Went back to the Fader Fort after stopping by the Pirate! party for a beer and saw a quick tight set by Chicago's Office, who introduced a few new songs from their forthcoming Scratchie Records release (label owner James Iha was in the crowd). Following their set, the place got packed as everyone waited with baited breath for Amy Winehouse, who I saw watching Office's set from backstage (it was just nice to see her since we'd heard she might cancel). She earnestly took the stage with only one guy playing acoustic guitar, her nappy hair sitting high on her head, tats and wild eye makeup in tow. But once she started, her voice commanded attention. The short 15-minute, five-song set included "Back to Black" and "Rehab," and hearing her raspy soulful voice made it worth it â save the fact that she looked bored to death. Every so often she looked like she would connect with someone in the crowd and give a flirtatious smile that seemed to show that there actually is a sweet, cool person behind all the hype and hard-partying persona. Before her set, they brought her into the Levi's pop-up store and the rep from Levi's asked her if she wore Levi's and Amy's didn't-have-to-think-about it response was â in her heavy Cockney accent â "I don't wear fookin' Levi's" and strode off. I ran into veteran music journalist Gary Graff later in the night at the Albert Hammond show who said he caught her at La Zona 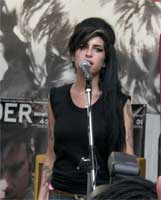 Rosa and said the set was brilliant â backed by a full band including horns. Hopefully when she comes to Chicago in May to play Schubas she'll do the same â and maybe she'll be a little more refreshed from playing show after show like down here.

Took a break for some champagne at Cork & Co. before a great dinner at Manuel's â one of Austin's best Mexican restaurants (or so they claim). Afterward we headed over to Beauty Bar to catch Brazilian DJs Bande do Role (saw the Tribune's Greg Kot outside who was there to see Yo!Majesty and said he saw an amazing set by Deerhunter earlier) before heading back over to Whisky Bar for one of the best sets during the festival â Britain's Winterkids. The five-piece packed the small club and had loyalists dancing, bouncing and pumping fists to their high-energy jerky-movement filled 30-minute set â that included a encore after the crowd refused to let them off the stage. An encore at South by? Didn't think that happened. We then stumbled over to Lance Armstrong's Tap Room at Six to see a friend who bartends there. Beach House was

about to come on and having read a lot on a variety of blogs we decided to check it out. I felt, from the get go, they were too cool for school (especially the chick who barked something in French to the sound guy â did he even speak French of was she just being affected?) and their music was droning, fuzzy and boring. We left after two songs and headed over to the Blender Late Night spot on Congress to catch Albert Hammond Jr. (once again missing the Fratellis). Drinking flowing Absolut and playing free Pac Man (I got to Double Apple!) we spotted Clell Tickle (aka Aziz Ansari) and Best Week Ever's Paul Scheer. Chatted with Paul for a few minutes and thanked him for making me laugh each and every week. He told me that he, Aziz, Rob Huebel and Jason Woliner are about to premiere Human Giant, a new show on MTV (April 5) and handed me a promo CD. I expect only funny funny shit from this group. Once Hammond started, he admitted â through a whisper into the mic â that he'd just done some cocaine in the bathroom and he definitely seemed a little fucked up during his set, throwing out some random quips. But musically 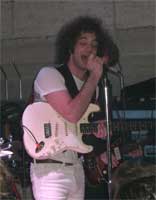 he was spot on. Hearing him live you realize just how much of an influence his guitar playing has on the Strokes music. He's a central force and his live set was tight, engaging and straight up rock.

Heading back to Chicago now â and I'm ready for a little rest. Overall, SXSW was an experience with too much to take in. Wish I could've seen Mew, Lionheart Brothers, Kristoffer Rangstam, Sondre Lerche, Aqualung, Kings of Leon â so many more. Just not enough time.

As a huge Brandi Carlile fan, I have to be nosey and ask you when we can expect to see more of your interview with her!

Hey, I found it! Great article for the AP, with a couple photos (in 2 diff ver's):